In many regions groundwater abstraction (a hydrogeological term for extraction) and well construction has predominantly targeted shallow aquifers and surface water resources i.e. rivers, streams, lakes. The average depth of a water well worldwide is between 3 and 18 meters. Thus, contamination, long-term sustainability and depleting water supplies are a chief concern.

Because Deep Seated Water is found deeper than the shallow aquifers, it is less affected by abrupt changes in the regional hydrological (rainfall/climate) cycles. In addition, there are vast amounts water. The U.S. National Groundwater Association estimates that there are 22.6 million cubic kilometers of groundwater in the upper two kilometers of the earth’s crust. That is enough water to supply Earth for over 6,000 years at today’s global consumption rates! Tapping less than two tenths of one percent of this water annually could provide nearly 17 gallons (64 liters) of additional fresh water per day to every man, woman and child on the planet.

First, DSW delivers an alternative source of fresh water that can avert a water crisis in a drought-stricken area.

Second, as a supplemental resource, when sustainably managed it can complement existing water conservation measures in a given region.

Third, it provides clean, fresh water that is not impacted by contamination or pollution from surface infiltration.

Fourth, by delivering fresh water from deeper sources, we permit shallow aquifers to recharge and restore surface water environments, which can improve water quality and quantity.

Fifth, by reinforcing long held traditions in sustainable water management while adding Deep Seated Water to a region’s water inventory we can bolster water, food and general ecological security, as well as political and economic security in many areas.

Sixth, the Deep Seated Water approach is economical when compared to large- scale solutions, such as desalination and wastewater treatment.  These approaches can cost hundreds of millions of dollars and take years to plan, build and implement.  DSW can be located and water producing wells can be completed within just a few months.  DSW can also be scaled up over time based on the magnitude of the need, rather than an up-front commitment of a large budget and construction cycle.

Groundwater systems are dynamic systems in a constant state of flux. Groundwater scientists and managers want to make informed decisions with regards to the water resources within a basin.  One commonly used measurement method is called the groundwater budget.  The groundwater budget of a defined area (basin) is the result of an analysis of that groundwater basin’s water inflows and outflows to determine the change in groundwater storage in that basin. For this, many different inflow and outflow sources are identified, assessed, and monitored. 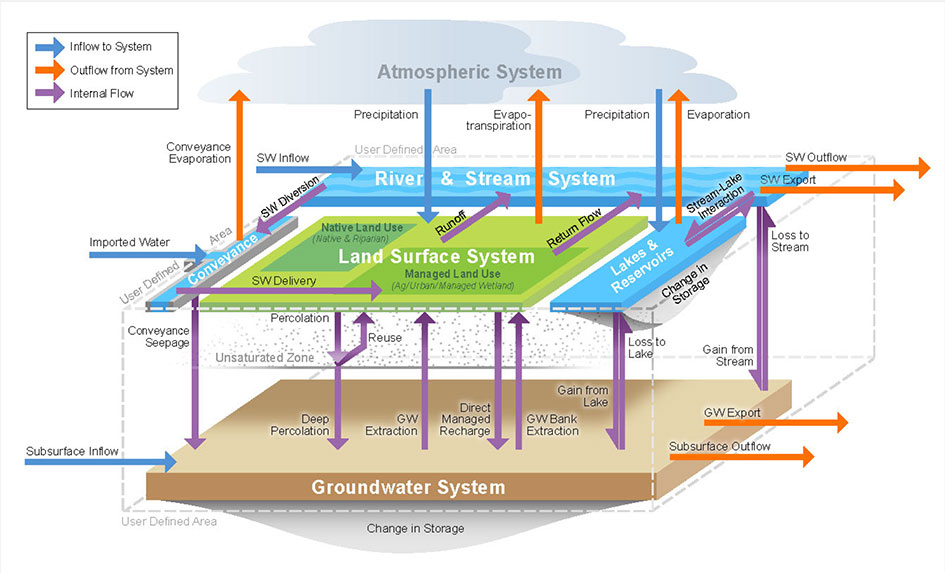 However, the current practice of groundwater budgeting rarely takes into account subsurface inflows across defined basin or subbasin boundaries as this is an invisible and thus hard-to-trace component of water budgets.  Such subsurface inflow usually occurs at the level of deep aquifers that typically do not interact significantly with shallow aquifers.

These deep aquifers can be viewed as networks of permeable geological formations as well as fracture-based conduits (so-called fracture-enhanced secondary permeability). These formations and conduits are hypothesized to be integrated and make up vast  watersheds or drainage basins that collect and carry groundwater from high elevations over long distances through these networks.  Additionally, these networks may be augmented by inflow from hydrothermal sources from magmatic bodies. Water may be travelling through these networks for centuries.

“Thank you for your great work. I can assure you that it was a wonderful relief to find good water after 6 dusty, dry holes [drilled by others].”

Stay up to date with the latest AquaterreX news!

Thanks for subscribing! Please check your email for further instructions.

Something went wrong. Please check your entries and try again.

"Earth’s Water – Fallen from Outer Space or Degassing from Inside the Planet?"Don't Miss This Report!

Get this FREE report and receive the latest water news and updates!