There are approximately 1,800 data centers in the US that house the computers that feed the Internet and power business computing across the nation. This is a linchpin of the economy. A little-known fact is that these data centers generate huge amounts of heat due to the massive amounts of power consumed. Thus, water becomes a critical element in the cooling systems that keep the centers operating. An average data center can use 300,000 gallons of water a day to cool the facility – the same amount used by 100,000 homes according to researchers at Virginia Tech.

But that pales in comparison to semiconductor manufacturing, which averages 2,000,000 to 4,000,000 gallons per day, according to Sustainalytics. And tech companies are aggressively expanding chip manufacturing in the U.S.

With the ongoing drought covering half of the United States, a crisis is brewing. Many tech companies have built massive facilities in the drought areas of the West, due to demand and a lower cost of operation in the desert areas of California, Arizona, Nevada, and other states. States eager to gain employment and tax revenue have welcomed these cash-rich companies with open arms, but with what some consider less regard for the “downstream” effects of water usage.

Certain actions can help reduce water consumption, such as lowering the relative humidity in a data center as Meta is doing, but many of these actions are a drop in the bucket when compared to overall use. Drought risk to data centers

A Growing Need For a Supplemental Source of Water

Water supplies are being tapped out while the need for growth remains. That’s why a supplemental source of fresh water is desperately needed in many areas. Fortunately, a vast supply of water is available and economically accessible. 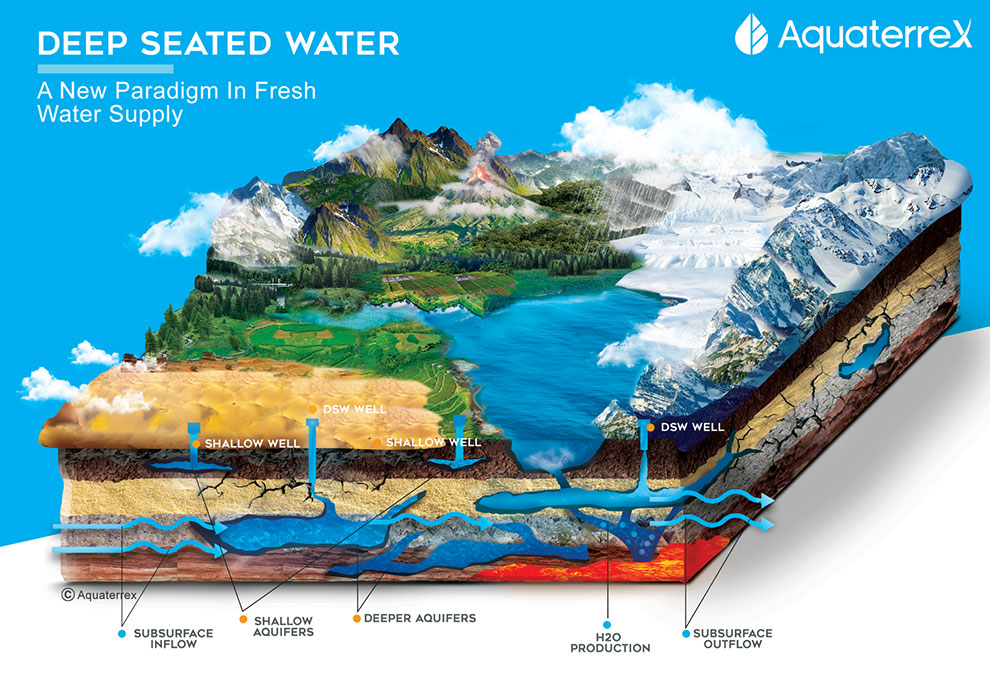 The Missing Piece That Can Solve the Water Crisis Puzzle

Deep Seated Water is the Missing Piece that can solve the water crisis puzzle – contamination, drought, scarcity. Many water strategies focus on conservation, rather than additional supply. Other solutions such as desalination and wastewater treatment are potential answers for some, but they also come with trade-offs such as high cost, high energy usage, long planning periods and toxic waste. Deep Seated Water is located almost everywhere on the planet and it can be added to the mix of solutions as a supplemental freshwater source that is not subject to contamination, is fast and easy to implement and is economical and scalable. And, tapping Deep Seated Water allows both surface water and shallow aquifer sources to recharge, making the total system more environmentally sustainable.

AquaterreX (www.aquaterrex.com) is a global environmental services organization with a mission to broadly implement effective water and food security solutions. AquaterreX maintains offices in Florida, California and Australia, and has representation in the United Arab Emirates.

The name AquaterreX comes from the Latin, aqua (water) and French, terre (earth, land) which is a derivative of the Latin, terra, and “X” for exploration.  Thus, AquaterreX encompasses water and land solutions for the planet.