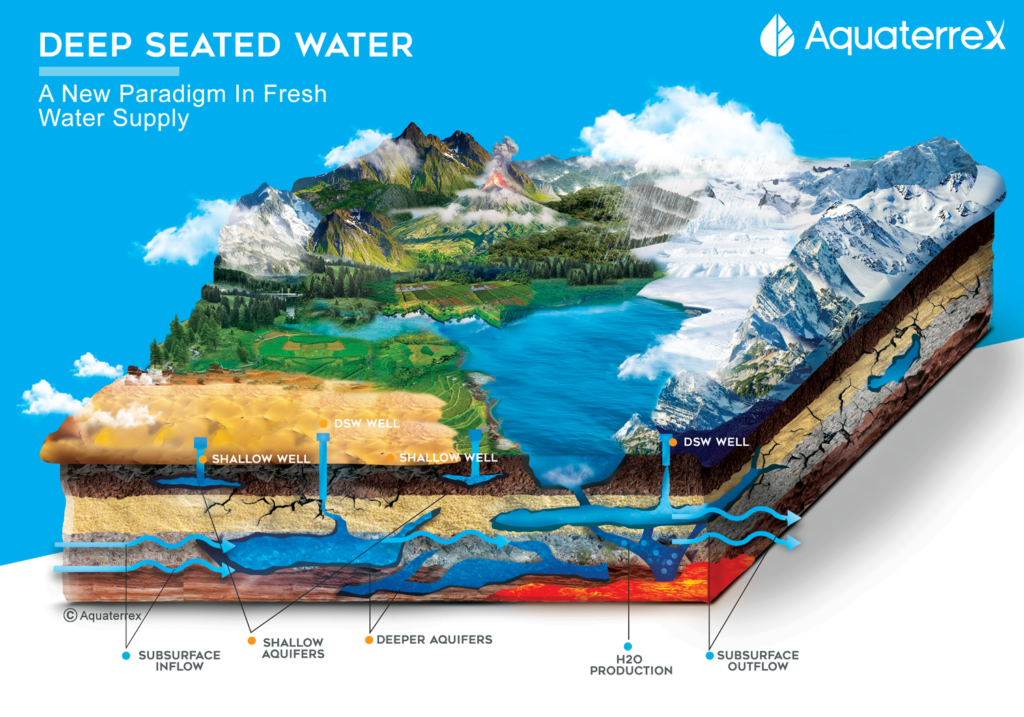 Global water management strategies are missing a key component in their planning and water conservation models. This missing component results in overdrawn surface water supply sources, such as endangering rivers and depleting shallow groundwater resources. A century of innovation and scientific discovery indicates there may well be a set of pathways that can lead to natural, sustainable abundant water. This illustration of Deep Seated Water clearly depicts this new paradigm in freshwater supply and is explained here. 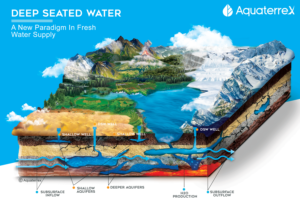 Shallow water is a part of the hydrologic cycle, which is water evaporation – clouds, rain, water runoff — surface water. Shallow water is an open system, draining into ponds, lakes, rivers, and eventually into the oceans. Part is evaporated into the clouds, dropped as precipitation, and the process continues. Part seeps or infiltrates into the ground from the surface, contributing to the recharge of shallow aquifers. Shallow water is also called a water table aquifer, open to the atmosphere, interchanging at one atmosphere of pressure. That is why one needs pumps to access shallow water.

Shallow wells are wells intended to access the water table aquifer. In the early days, they were developed by hand pumps, nowadays by more sophisticated water pumps. The depth of a ‘shallow’ well has no fixed definition. Its depth can be from as little as 25 to 50 feet down to several hundred feet, in desert environments, for example. The main characteristic is that no matter the situation, that layer of water is open to the atmosphere.

An aquifer is a sub-surface layer of water-bearing permeable rock, rock fractures, or unconsolidated materials. Any of these three can carry or store water. An aquifer can be confined by impermeable rock or clay, which is called an aquitard. Or it can be unconfined, taking in or passing water along through a permeable stratum, such as sandstone, gravel, or fractured rock.
Fractured-rock water-bearing fractures can be horizontal, vertical, diagonal, or combinations of the three. A horizontal aquifer contains water all from one level. A vertical or diagonal aquifer may itself go quite deep, or connect with other fractures that go deep, and, therefore, access waters deeper than shallow water, or underlying a shallow water aquifer. 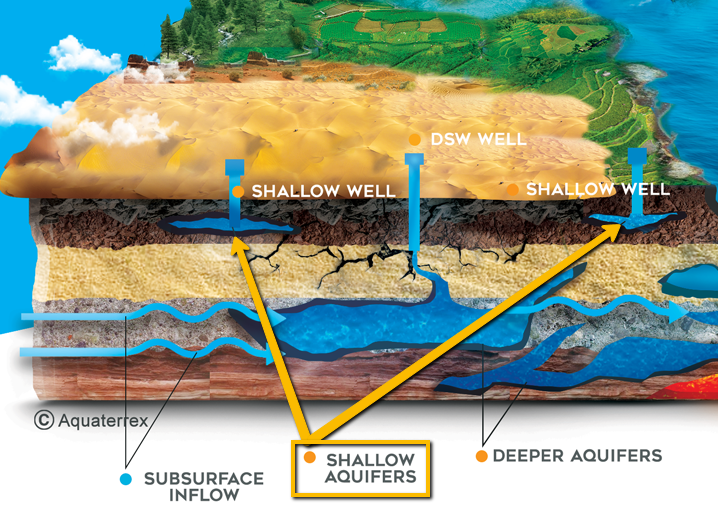 As can be seen in the Deep Seated Water illustration, the shallow, unconfined aquifer is easily contaminated from surface sewers, pipeline breaks, spills from various sources, seepage from mine

tailings, agricultural runoff, etc. Therefore, it is common in shallow wells to add a borehole casing to try and protect the well water from such contamination.

A deeper aquifer implies water that is not only to be found deeper but also sometimes is separated from the hydrologic cycle. The sources of deeper aquifers can be rock-fracture systems, ranging from close to distant, or deeper sources of water, such as contained fossil (or old) water systems. Fossil water is a buried water system, which was once part of an active hydrologic cycle, but has over geologic periods of time been buried.

Sub-surface inflows and outflows are inter-basin or cross-basin flows. Deep groundwater aquifers quite distant from one another can communicate through faults and permeable zones, volcanic lava tubes, fissures, etc. Water precipitated into the fractured rock systems of mountains can infiltrate deep and flow through gravitation and other pressure to come out in seeps, springs, and artesian wells far distant from the source.

Such spring or well water can only be associated with specific distant sources through sampling and chemical analysis. These sources are usually long-lived, having viability over thousands of years and hundreds of miles. If you have an artesian well or water spring, you may not be easily able to identify its source or sources. Paleo-rivers or buried river valleys may contain water in the alluvial sands and gravels that were buried over geologic time, resulting in ‘river formations’ deep underground.

“The water cycle involves more than just the water that circulates between the atmosphere, oceans, and surface waters. It extends deep into the Earth’s interior as the oceanic crust subducts, or slides, under adjoining plates of crust and sinks into the mantle, carrying water with it.”
Steven Jacobsen, PhD.
Northwestern University

H2O Can Rise From Many Sources

H20 production is the creation of new water, bringing new, non-atmospheric water to the surface of the earth. It can rise from many sources. Magmatic water deep in the continental crust can rise literally all the way from extremely deep pockets of molten magma four hundred or more miles below the earth to the surface in volcanic explosions, which release huge amounts of ash, gases, and water vapor.

Magmatic water may be released more gradiently through thermal springs and seeps, as is found across Iceland. Connate is another productive source of water, as it stems from the original water content of rocks, squeezed out in the process of lithification under pressure and heat. Fossil water is trapped water buried at depth, such as Pleistocene ice sheets.

“The components of water (your classic hydrogen and oxygen) are trapped inside the molecular structure of minerals in mantle rock, embodying a fourth form of water that is neither liquid, ice, nor vapor…The water in the mantle, which could equal the amount of water in the world’s oceans, may be an integral part of sustaining water on the surface.”
Joseph Smith, PhD.
University of Colorado, Boulder

Deep Seated Water™ (DSW) is a coined term that can be used to identify water originating from deeper sources, such as suggested in the paragraph above, and as seen in the illustration. It should be chemically distinct from local shallow groundwater and likely be older than surface water. One study suggests that water low in Total Dissolved Solids (TDS) at 3.6 km depth could be attributed to water produced under great pressure during the conversion between clay types. Another paper, analyzing waters deep in the Delaware Basin in the southwest U.S. found similar low TDS and also attributed this to clay conversion under high pressure. In the latter case, chemical and isotopic data precluded that the water source was meteoric.

“Conventional wisdom tells us that the salinity of pore water increases with depth, becoming fresh to brackish to multiple times the salinity of seawater…There are major exceptions to this rule.”
Jean-Philippe Nicot
University of Texas, Austin
Bureau of Economic Geology

Deep-seated water (DSW) is just such an exception. In fact, depending on variable sources and different pathways, DSW wells might be expected to produce fresh, high-quality water. Identified and located through the application of high-tech elaboration of remote satellite and other data, DSW can be accessed via water-bearing rock fractures communicating with any of various deep sources of water. Such fracture systems may interconnect, providing pathways for water up to or very close to the surface.

“Hydrogeologic Study of the Plains of San Agustin and the Alamosa Creek Valley,” New Mexico Bureau of Geology. https://geoinfo.nmt.edu/geoscience/research/home.cfml?id=37